On Monday, April 15th, 2019 at approximately 1:50 a.m., a Shiloh Police Officer, while on routine patrol, observed a vehicle with its car doors open. The Officer believed a burglary to a vehicle could possibly be occurring. Upon exiting his patrol vehicle to investigate, three subjects fled from the scene, first on foot, then in a vehicle. The suspects were followed to a location where they fled the vehicle on foot. One suspect was taken into custody, while two escaped. An inventory search of the vehicle recovered items connected with additional car burglaries in the area. Through further investigation, two juvenile suspects were identified and later taken into custody. This case was submitted to the St. Clair County State’s Attorney’s Office for review.

On Tuesday, April 16th, 2019, Assistant State’s Attorney Elizabeth Nester issued an eight-count warrant, #19CF0057601, #19CF0057602, #19CF0057603, #19CF0057604, and #19CF0057605 for Burglary, Class 3 Felonies; #19TR0009894 for Obstructing a Peace Officer, a Class A Misdemeanor; and #19CM0001080 and #19CM0001081 for Attempted Burglary, Class A Misdemeanors, charging Alexander E. Ruocco of the 1200 block of McKendree West in Lebanon, Illinois with the above crimes. One of the juveniles was charged with two counts of Burglary to Motor Vehicle, one count of theft of credit card, and one count of theft-control over stolen property and is currently in custody at the St. Clair County Juvenile Detention Center. The second juvenile is still in custody at the St. Clair County Juvenile Detention Center on unrelated charges and has yet to be charged.

The Shiloh Police Department has currently received 16 reports of burglary to motor vehicle from the night of this incident. Any additional victims are encouraged to contact our agency to file a police report. 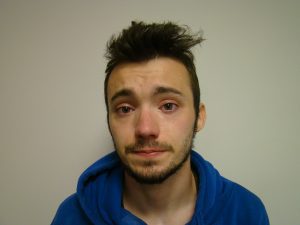