On Saturday, November 10th, 2018 at approximately 6:27 p.m., a Shiloh Police Officer observed a vehicle make a traffic infraction and attempted a vehicle stop on the vehicle on Frank Scott Parkway at Fountain Lakes Parkway. The suspect vehicle fled the scene at a high rate of speed and the Officer lost sight of the suspect vehicle. It was later discovered the driver of the suspect vehicle committed a theft from the Circle K Gas Station, located at 1242 Thouvenot Lane. This case was submitted to the St. Clair County State’s Attorney’s Office for review.

On Monday, January 7th, 2019, Assistant State’s Attorney Elizabeth Nester issued a three-count warrant, #19CF0003301 for Retail Theft-Subsequent, a Class 4 Felony; #19CF0003302 for Driving While Driver’s License Revoked-Subsequent, a Class 4 Felony; and #19TR0000005 for Fleeing and Attempting to Elude a Police Officer, a Class A Misdemeanor charging Marquis V. Caldwell of the 1st Block of Pheasantwood Drive in Belleville with the above crimes.

The warrant was reviewed by St. Clair County Judge Stephen McGlynn who set Caldwell’s bond at $30,000. Caldwell is currently at large. 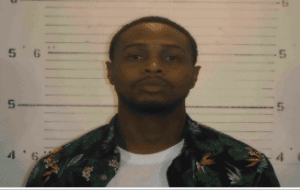